How to Build
PVC Pipe Characters 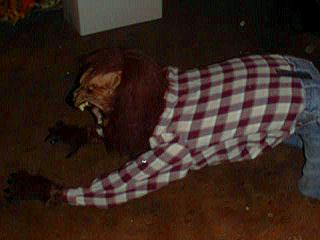 Costs are based on what I paid for an item. Items with $0 next to them are items that I had lying around the house already and did not have to purchase. The more you improvise, the cheaper the prop will be!

Measure the PVC Poles to the size you want for your Character. The numbers I give will be general guidelines, feel free to adjust them as you see fit. Mine were chosen to give the character height of an average person as well as make the best use of the poles used. With the measurements given, 4 PVC poles should make 3 characters.

Place the peices together similar to the image above. Elbows used for the Wolfman were all 90 degrees and placed at the shoulders, elbows, hips, and kneecaps. Arms and legs were then bent to give a crawling shape. Joints are then duct taped or glued. I chose Duct Tape so that I can take him apart after the season and re-assemble him next year or change his shape if I need to. Once taped/glued, you will need to place the peice of thin wood on his back. Mine was measured to be 22 inches high and 10 inches wide (to cover from shoulder to hip and wide enough to give him a decent sized torso. First, place the board in a garbage bag and place the pillow inside on top of the board. The board covered by the pillow and the garbage bage are then all taped to the shoulders and to the hips to keep them from falling off. The garbage bag is only needed if the item will be outdoors, to prevent the pillow from becoming waterlogged. Once this is taped on, it is time to dress the character. Put the old shirt and pants on the character and fill arms and legs with blown up balloons to give him more realistic arms. Now take the foam wig head and tape it to the neck pole. For a character standing or a wolf looking down, you can cut a hole in the bottom of the head and place it on the neck post. All that is left are the final touches. The hands are made with old brown gloves, glued on fake press on nails, and some fake hair bought at a craft store. Stuff gloves with anything from garbage bags to paper towels to give it a hand shape and then duct tape to the wrist pole on the PVC Frame. Cover the wig head with a black garbage bag and put on the wolf mask and you are finished!

Satan was made roughly the same way only his elbows on his arms are at 45 degree angles to make his arms bend differently. His legs were bent to a sitting position. His costume is made up of old halloween costume parts that I had lying around. For the cost of a few elbows, a cross bar, a T bar, and an extra pole, we made a pretty cheap Satan that looks really cool on the roof!